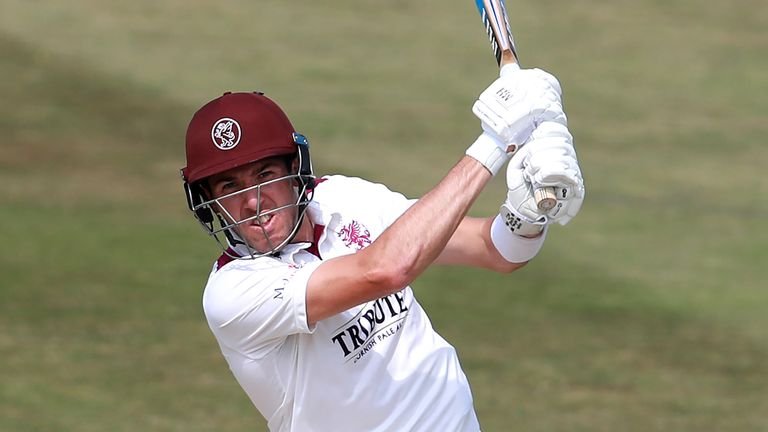 Jamie Overton's explosive maiden century for Somerset put them on the verge of staying perfect in the Bob Willis Trophy with Warwickshire on the ropes in their Central Group fixture.

Resuming on 214-6, the visitors were able to extend their score by 199 runs largely thanks to a stunning 10th-wicket partnership.

Seam bowler Overton, who will join Surrey at the end of the season, struck 120 off 92 balls and put on 180 with Steven Davies, who finished 123 not out.

Somerset then pressed home their advantage at Edgbaston with Josh Davey's 3-19 leaving Warwickshire on 104-6 and still 188 off making the visitors bat again. Warwickshire vs Somerset scorecard

There could also be a positive result between Northamptonshire and Worcestershire after Nathan Buck impressed with bat and ball for the hosts.

Some late-order runs from Gareth Berg (45) and Buck (32) ensured the home side reached 212 all out despite the best efforts of Ed Barnard on his way to 4-46.

Tom Fell stood strong for Worcestershire at Wantage Road and finished unbeaten on 81 to ensure the visitors were 177-6 - a 184-run lead - at the close after Buck claimed 3-30. Northants vs Worcs scorecard

Wickets tumbled at Sophia Gardens, but Glamorgan's match with Gloucestershire looks set to finish as a draw.

The former Middlesex batsman saw his 244-ball vigil ended by Leus Du Plooy, but his 219 runs was his highest ever score and enabled the hosts to declare on 400-6 after Jonathan Tattersall added 66.

Derbyshire captain Billy Godleman struck a patient 54 at the top of the order in reply and yet three wickets for Steven Patterson reduced them to 198-6 at the close. Yorkshire vs Derbyshire scorecard

Liam Livingstone finished with three for 72 to dismiss the hosts for 472 at Trent Bridge before Zak Chappell's three-fer reduced the visitors to 129-6 ahead of an intriguing final day. Lancs vs Notts scorecard

David Payne's five-wicket haul wrapped up the home side's innings on 116 and Tom Lace (42) and Ryan Higgins (48) helped Gloucestershire establish a lead of 65 before they were all out for 181. Glamorgan vs Gloucs scorecard

Yorkshire's Dawid Malan scored his first double-century on the third day against Derbyshire in the North Group.

Only 8.5 overs were possible at Leicestershire's Fischer County Ground and, while Durham got up to 250-7, both captains will have to be creative to try and force a result after rain wrecked the third day. Leics vs Durham scorecard

Sussex are in a strong position against Essex in the South Group after 16 wickets fell at Hove, including five for home bowler George Garton.

Jamie Porter claimed two scalps at the start of the day to complete his own five-wicket haul and dismiss the hosts for 194.

It was Garton's day, however, with the 23-year-old finishing with 5-26 from 10.5 overs and clinching the prize wickets of Sir Alastair Cook and England hopeful Dan Lawrence.

After Essex were skittled for 140, Sussex closed on 57-2 with a lead of 111 going into the final day. Sussex vs Essex scorecard

Joe Denly reminded the England selectors of his ability with 70 not out for Kent, who were 146-5 at the close against Middlesex.

Miguel Cummins made life tricky for the hosts at Canterbury with 3-41 and they trail the visitors by 123 runs.

Earlier in the day Robbie White fell agonisingly short of a maiden century for Middlesex when Darren Stevens had him caught for 99 with the away side all out for 269. Kent vs Middlesex scorecard

ทีเด็ดบอลวันนี้
Covid-19: Why Hong Kong's 'third wave' is a warning
Comments
I BUILT MY SITE FOR FREE USING